The past couple of weeks have been quite busy at Aeclanum. My trench (Saggio 8) received two, bright eyed, bushy tailed new participants who were eager to dive deep into all the mysteries that the archaeology of Aeclanum holds.

What are those mysteries? In case you missed my post from the last block, our trench’s purpose is to investigate a collapsed wall that appeared on an electromagnetic resistivity survey conducted before the project’s arrival at Aeclanum. This method is similar to the ground penetrating radar (GPR) survey which the Apolline Project conducted a few weeks after I left last year, although results can vary based on factors like soil types and moisture. After removing back-fill, setting up a ramp, and doing some probing where last year’s excavators left off, we really wanted to get beneath the collapsed wall to find out 1. which portions of the trench were “inside” and “outside” of the structure, and 2. what was the nature of the structure (i.e. was it a home, a place of manufacture, etc?). The hitch was in getting permission from the Sopraintendenza for removing elements of the collapse, given that technically the collapsed portion of the wall is an architectural component. Regulations require special permission for dismantling or removing architecture. Standard archaeological procedure typically views the elements of a collapse as a deposit, which doesn’t require special permission. To avoid the debate, we extended the trench an extra 2 meters to the southwest to find the edge of the collapse and hopefully not have to remove any of it. In a typical turn of events, the same day we’d begun excavating our extension, we got the permission. Nevertheless, we figured we’d stick with the extension since it seemed to be the best way to mitigate the need to save some of the well-preserved collapsed wall while still getting an adequate amount of space to explore the stratigraphy further.

Since the extension started with topsoil, we’ve had to spend the majority of our time busting our humps to remove material from the plow-zone. To an archaeologist, this is not exactly the most exciting kind of stratigraphy. The plow-zone is a layer of soil that is heavily disturbed by agricultural activity. Plowing essentially disrupts the orderly deposition that accumulates as a result the law of superimposition. Years of cultivating the ground results in the mixture of what would otherwise be orderly accumulated soil; components and artifacts that have been deposited in those disturbed layers are also heavily damaged by this action. Simply put, the farmer’s plow jumbles up stratigraphy, mixing modern material like pieces of Foosball table figurines with late-antique common ware. While we’ve found great artifacts like a coin and some really great diagnostic pottery, we cannot use them to learn much about the site or the context in which they were found, since our Terminus Post Quem is whenever the Foosball table was made, not when the pottery was.

Thanks to the hard work of my students and the help of my fellow supervisors, though, by mid-week we were working with layers deposited in antiquity and undisturbed by modern activity. These layers have been quite fruitful in the materials we’ve been recovering: the “lower plow-zone” (affected by agricultural activity in antiquity) and the soil deposit immediately above the collapse (and below the plow zones) have together yielded several coins, countless diagnostic sherds of pottery, or pieces (typically rims, bases, and handles) that can be used to determine the shape and ware of the vessel, and an unusual concentration of colorful glass tesserae and glass slag, or the byproduct of manufacturing glass. For now, these artifacts are still small in number to make any definitive conclusions about the nature of the area we are digging, but they do give me a little optimism about what we might find as we continue.

Our group also had to work through the smoke of hundreds of fires from around the region of Campania, the intensity of some had caused the evacuation of Pompeii. Fortunately, the area around Mirabella was only minimally affected.

Friday, we wrapped up this two week block with an amazing open site day for the community, loaded with activities geared towards and learning for children. Hundreds of kids got hands-on experiences with osteology, marble analysis, paleobotanical flotation sampling, ceramic analysis and a grand tour of the site. All these activities were organized by my colleague, Zofia. She also made all the artwork for our signage and pamphlets, making the entire experience relatable and engaging! Zofia also runs a blog that I encourage you all to check out!

Next Thursday, we’ll be continuing with our community engagement by organizing a Trivia Night open to everyone at Filiberto’s. These events and a few other upcoming projects are part of the Apolline Project’s Public Archaeology initiative that I’ve mentioned previously. The goal is to engage the community and create a vested interest in not only what our organization is doing at the site, but the continued sustainability of the heritage of Aeclanum for the town and region.

For now, some of the other supervisors and I are enjoying some much needed R&R in the town of Taranto in Pulia. The history of this town extends back to the Neolothic period, with a rich culture that is well connected to the emergence of bronze working in Greece. A Greek Colony was founded by the 7th century BC, and began to take on much of the cultural elements of archaic Greece here in Italy, similar to Paestum. By the early 3rd century BC, the Romans had imposed control over the city,  by then called Tarentum, and began a process of assimilation that was typical for the rest of the Italian peninsula and its city-states. To top it all off, the modern city is replete with picturesque scenes of the coastline, beaches, harbors, seafood and fortifications from the 16th century to World War II. 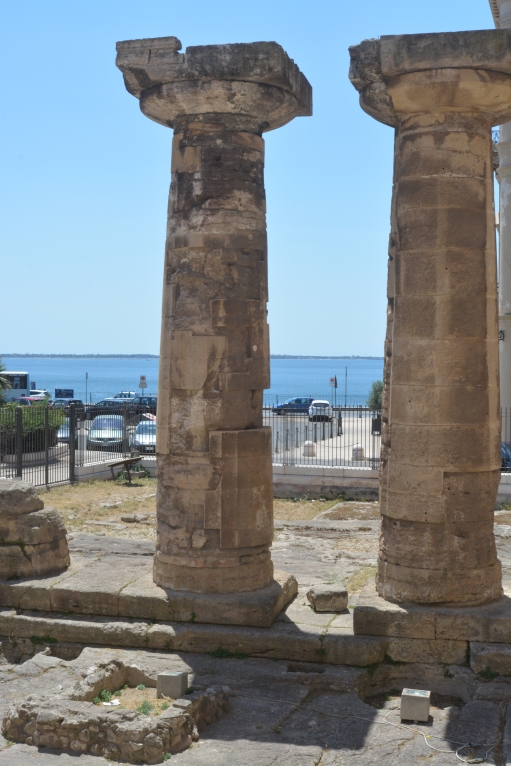 When we get back, we’ll be welcoming a whole new group of participants and we’re looking forward to closing out this season with some amazing finds and learning plenty of new things about Aeclanum!

View all posts by thodust