The last 6 months of my life have been a roller-coaster; my physical, mental, and emotional state have hit some new highs and new lows. Without getting into details, that’s my best excuse for the epic delay in concluding my chronicle of last summer’s field season. I’ll be slowly making some changes to The Starving Archaeologist bring some fresh breath into my site, but for now here’s the last installment of my summer 2017 field season series:

Last I left off, I had wrapped up the summer’s adventure in Italy with a melancholic reflection on the irony of backfilling, covering up any evidence that my team had been working so hard for 6 weeks in that trench. Backfilling is a weird and inescapable experience and we could all feel it on that last day at Aeclanum.

I planned a couple night’s layover between Apolline and Cyprus in Rome. I got there and spent the first night hanging with my dear friend, Julia. I met her in 2011 during my first trip to Rome while she was interning for the AIRC’s Summer Field School in 2011; I was but a humble rising senior in college then. We’ve kept in touch since and she’s been a sounding board, cheerleader, and venting partner on the quest that is this stage of an archaeologist’s career. She’s now in pursuit of a graduate degree that will situate her to work for NGO’s and (*fingers crossed*) the UN. Upon my arrival, she treated me to a homemade meal and we went out for drinks and hookah. We talked all about the life well-traveled: relationships, mutual acquaintances, career and money struggles, family, etc. The next day, I took her to the Baths of Diocletian. She’d never been into the museum, so I was happy to show a veteran of Rome something new. The place has a massive epigraphic collection peppered with your standard sculpture, mosaic, fresco, and pottery. If you ever get the chance to go to Rome and have a free afternoon, the museum is just across from Termini Station and the Palazzo Massimo. After we parted ways, I went back to my Airbnb and hunkered down on my field report for Saggio 8. Before I knew it, I needed to pack and get ready to go to Cyprus.

I wasn’t really ready to head off to a new country. Much like my first time in Pompeii, I neglected to do my homework, at least the parts that would have prepared me for traveling to a new country. That being said, I knew I would be in good hands when I arrived.

Visiting Cyprus was the culmination of a lot of missed connections and bad timing over the past few years. A former professor and mentor from college, Pamela Gaber, had always left an open invitation for me to come; however, Italy and France (among others) and several major life events had always hindered me from going. Even this season was a stretch in the planning stages. Nevertheless, there Pam was, greeting me with bright eyes and a big hug at Larnaca Airport for my midnight arrival. We drove from the airport to the dig house, a rented abode in Pera Chorio, arriving well after 1am. Pam pointed to a pair of large military tents and said, “So Jake said there’s a spare cot in the boys tent, there. Are you going to be ready to work at around 5:30?” Taken aback by the tent and the mention of a time before 7 in the morning, I assented without taking a moment to think about what I had just signed myself up for.

While I’ve “roughed it” before on a dig (in France, I had slept outside in a tent to myself for two months), I wasn’t ready for what the beginning of August in dusty Cyprus held. It took a second to process that I’d be sleeping outside in the elements: a combination of heat and bugs made sleep difficult most nights.

Our wake-up time was also a shock; I’ve seen my fair share of sunrises, but by no means am I a morning person. Nevertheless, it was apparent about 2 hours after waking up why we were up so early: the heat was stifling on Cyprus. I was partnered with Pam and a student to do some plan drawings of architecture excavated in previous seasons. The entire time I stood dangling a plumb bob, sweat dripped from my face, arms, and anywhere else gravity and the heat could extract it from me.

Normally, I’m a proponent of a good pair of work pants, boots, and a t-shirt in the field, but by our afternoon session (midday is so hot, we got a siesta), I had to revisit that plan. I ended up in athletic shorts, boots, and a tank top and looked more like a bum than an Archaeologist, but at least I didn’t end up as a puddle in the excavated ruins of Idalion.

Somehow, the universe called me to Lycoming’s Idalion Expedition at just the right time, since it was the project’s last season. I had arrived for the Project’s final week of fieldwork comprised mostly of wrap up activities: cleaning, photos, measuring, drawing, and, of course, more backfilling. The veteran students, supervisors, and most especially Pam clearly showed the melancholy of saying goodbye to the site. Pam has been working at Idalion for decades. There are grown adults with thriving businesses and families in the surrounding community that were teenagers volunteering as field hands for Pam’s first season as a supervisor. In many ways, she is the living embodiment of Idalion and archaeology there.

I feel privileged to have gotten an opportunity to work at Idalion and be one of the last few people to say that they were part of what Pam and my Alma Mater had been doing on site for many years prior.

Idalion is a site whose narrative in the surrounding landscape extends into prehistory, capitalizing on the convergence of nearby water features. In time, as Cypriots began to reap the benefits of it’s copper resources on the island, Idalion grew into a proper urban settlement, moving it’s administrative and worship centers to the hilltops nearby and profit from it’s position along the routes for which copper moved from mining, to refining, and ultimately export. As the “superpowers” of the Ancient Near East arose in the Iron Age like the Assyrians and later the Persians, foreign influence, political machinations, and infighting on Cyprus claimed Idalion as a victim. A breach in the west Acropolis fortifications stands as a testament to the violence that occurred. Occupation of the site, however, continued through the Roman period into the middle ages; new structures and facilities arose during these periods for various industries and activities. A similar story can be told for most of Cyprus, allowing for the switching of roles for conqueror or conquered. 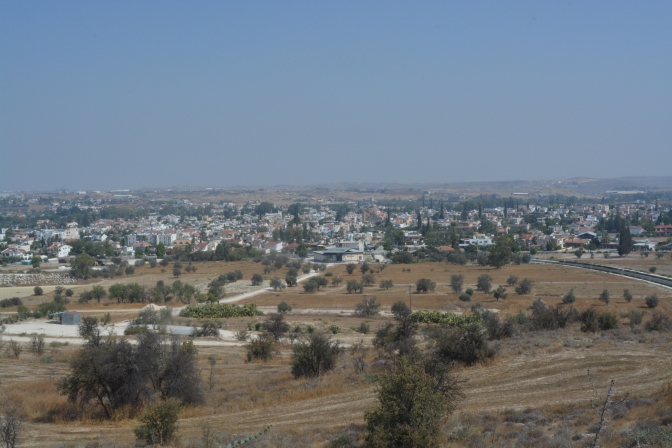 A recurring theme in the island’s past stood out for me in learning about the place: Cyprus was an island of strategic and economic value that drew the attention of merchants, settlers, and powerful Mediterranean states who sought to leverage that value; despite the influence and eventual presence of outside societies, the Cypriots always seemed to retain and express the integrity of their cultural identity. While not the only place in the ancient Mediterranean to exhibit such a resilience, the island’s location at the fulcrum of so many ancient powers throughout history makes this phenomenon impressive. Fascinatingly, the modern Cypriot population carries with it a smoldering sociocultural conflict stemming from the influence of the UK, Greece, and Turkey. Each of these nations has, at least at one point in the 20th century, claimed the island and sought to capitalize on it’s strategic and symbolic value. Today, there’s an attachment to the notion that Cyprus was historically a Greek-influenced cultural satellite; however, this narrative is more obviously told as a spite to Turkish encroachment (read: invasion), and British colonization rather than an archaeologically, anthropologically, and historically well-supported perspective.

At end of the first week, I had a moment of panic in talking with the other participants; I realized they would all be leaving a week before I was scheduled to depart! Had I misunderstood my correspondence with Pam in planning my time there and booked my departure too late?! In reality, no, and it was probably good I had. The final days of wrapping up a project required an intense cleanup of all the stuff that had accumulated over the years; everything from spare tools to home amenities needed to be relocated. Pam needed the help hauling all that stuff to thrift stores, the Cyprus American Archaeological Research Institute (CAARI), her house in nearby Alambra, or one of the facilities run by the department of antiquities.

The perk of being the last one left to help was being able to move into Pam’s air-conditioned guest house, and, once all the heavy lifting was done, having such a well-connected veteran of life and archaeology on Cyprus as a personal tour guide.

During our time together, we visited the archaeological highlights of the island: Kourion, Paphos, and even a Neolithic site as they hosted a reenactment of a feast, reconstructing techniques thought to have been used in a replica firepit. We also popped into the Archaeological museum, where I got to peek “behind the scenes” at the museum’s storage and collection not on display. Pam also took the time to highlight those portions of the displays that best told Cyprus’ history. Sadly, many of the details that distinguish these sites have escaped me with time, so I will need to rely on all the pictures I took to do the talking. I hope that my camera caught the inevitable eccentricity of a Neolithic feast reenactment and the rainbow of colors and intricate details of the mosaics at Kourion and Paphos.

When we weren’t hauling around stuff, or getting a touring every corner of the island, I got to enjoy some proper R&R. Pam and I went to the movies and saw Dunkirk and caught up on the last season of Arrow. I got to sleep in until mid-morning and ate filling meals with a proper stream of caffeine throughout the day. I never imagined that the trip would have allowed me to bond with Pam as much as I had; however, getting to know her better was encouraging for myself at a time when my career is developing. I found that our imaginations as archaeologists are exceptional, and we tend to express it through our love of science fiction and fantasy. Our lives and relationships are hard, but we will have the privilege of meeting equally eccentric and interesting people from all over the world and undoubtedly have a friend in every place. We binge our Netflix as good as anyone and can be masters at procrastination. Archaeologists are creatives and critical thinkers. Simply put, I got an opportunity to learn so much about myself in those conversations and I have to admit, I learned to love this life I’ve chosen more as I continue the path of developing my career in archaeology.

View all posts by thodust

One thought on “An Island Called Cyprus”